Request code to watch The Red Sea Crossing for free!

Atheists have scoffed at the mention of it, modern religionists have denied its veracity, and papal pundits refuse to admit that Constantine’s mother selected the wrong sites for The Red Sea Crossing and The REAL Mount Sinai – ground zero for the two most famous events in recorded history. Now, you will see the scientific and archaeological evidence that has been preserved in coral and stone for this generation.

Journey with Michael Rood and an international team of scientists and explorers as they document the most exciting archaeological finds in the history of the human race. You will sail the ancient “Yam Suph” (modern day “Gulf of Aqaba” aka the “Red Sea”) where hundreds of Egyptian chariots have been strewn across the sea floor. Robotic submarine cameras will lead you through an underwater battlefield where the coral encrusted remains of Pharaoh’s army still litter the ocean floor like an ancient chariot junkyard. This will be the beginning of the greatest adventure of your life. You will never be the same after experiencing The Red Sea Crossing!

Science and Archaeology prove that the Hebrew scriptures are accurate. Let everyone you meet know that Pharaoh’s chariot army has been found scattered for a mile and a half across the bottom of the Red Sea, and we’ve got it on video!

These FREE share cards will give you the tools you need to get the word out to the world! 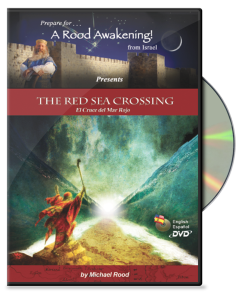 Get Your Own Copy

© Copyright A Rood Awakening! International 2019. All Rights Reserved.
Visit us at www.aroodawakening.tv